RSS
← ‘Character’ – a translated poem in Gujarati (ચારિત્ર્ય)
Who is really insane? – ‘Seldom’ such Posts (3) →

Rising above Corruption – A General Review

Not only bureaucrats, but who-so-ever come under boundary of definition of corruption, need to ponder over above words of Chanakya along with the life story of Valmiki, a great Saint (Rishi) and the poet of Ramayana. We know that the members of his family, when he was Vaalio, a Robber, denied to share with his sins saying that the one who commits sins must suffer their consequences oneself. 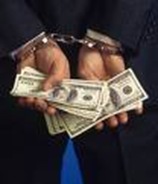 Violations of duty including to postpone works that are to be immediately done are the abstract forms of corruption. It may be defined in precise as “Corruption is the use of a position of trust for dishonest gain.” I shall remember Chanakya once again with his words as “one who is content with his riches has his heaven here on earth”. But, we see all around the world that the most of the people of all cadres in society are money hungry. They demand bribes for they want to make a decent living. They are not content with what they have and to satisfy their ugly desires they are prepared to do like anything by keeping their ears deaf to hear the voice of their inner soul. They do no see farther than the end of their own nose.

I’ll put an illustration just to counsel, those bribe-takers, with a hope rather, they may turn back from their sinful path who have stuck deeper and deeper up to their ears in mud of unlawful earnings. Many corrupt people do not learn any lessons from those who have been punished by law and their families have got ruined on all sides. Such people are like one who sells mirror but does not look at it, the one who always looks at mirror but does not straighten his dress and surprisingly a passer-by may straight his only a collar with just one careful glance at mirror. Here, we have to remember that a mere glance at mirror is not enough, but a strong will for self-reformation is also necessary. It is well said that the earthen vessel of sin is surely to crack down, sooner or later.

Now, let us divert to discuss some measures to control corruption spread world-wide. The most of the nations of the world are worried about how to combat the cancer of corruption. War on terrorism may be won by seeking international help using guns, but to fight corruption is the job of the respective nation itself. Corruption has become customary at every level of society everywhere. After all, nobody is more capable of resolving this problem than the citizens themselves.

To conquer war on mortal danger of corruption, some combined efforts from every corner of society are needed. Governments must blow bugles to declare war against this enemy for not only to protect economy but also to establish law and order strengthening national discipline. First of all, the Governments should frame such strict legislations where there should be no any escaping window for the culprits. For this very basic step, the political will must be there. Any nation that is serious about fighting corruption may need to establish new Agencies/Departments and encourage NGOs or strengthen existing ones. Anti Corruption Commissions should be made independent with full powers to bring anyone under grip of law regardless of the transgressor’s position.

To complement the working of the machinery of system, some new legislations need to be resolved for creating some special investigating units and special or circuit tribunals/courts for quick justice. Hopefully, these bodies will deal with such cases more efficiently and effectively. Role of both print and electronic media for abolition of corruption is equally important to investigate and expose corrupt practices as well as make result oriented efforts to create awareness in public.

If there is corruption in society, each one of us is responsible. It is wrong to blame the system. How can we separate ourselves from the system? We might begin by asking ourselves: “Am I incorruptible? If an opportunity comes my way, would I kick it?” It is not possible for all to be revolutionary, but we may at least be honest and that’s enough. It is to be remembered that when anybody is giving bribe, somebody is receiving bribe. One cannot clap with one hand. I believe that both the giver and taker of the bribe are equally guilty of corruption. It is never possible that the corrupt person puts his hand into our pocket and snatches away money from our pocket. We-citizens should approach to the concerned public servants with strong will power for our any type of genuine works being done with no any compromising expressions on our face. We should always remember that the corrupt person is always timid and he has to surrender himself before us simply gazing towards our body language.

Just nearing to conclude the post, I would like to say that the bribe-giver thinks that every man has his price; and, bribe-taker is also sure from his end that every work under his/her control has its price. Kelly Preston quotes “If a country is to be corruption free and become a nation of beautiful minds, I strongly feel there are three key societal members who can make a difference. They are the father, the mother and the teacher.” At one time, bribe was paid for getting wrong things done but now bribe is paid for getting right things done at right time. Tolerance of people towards corruption has increased its spread at a considerable high rate.

It is very difficult to catch big sharks in Great Ocean of corruption, but small fish are easily caught. Sometimes, higher authorities including certain ministries of revenue, transportation, taxation, public works etc. are involved in chain of corruption and the corrupt employees are promoted to higher positions instead of imprisonment. Election time is a great season in corruption market. Poor illiterate voters are bought by politicians and politicians sell themselves to Industrialists against their huge funding to fight election.

Summing up, corruption is interwoven in routine lives of civilians and it is very hard to abolish it fully. Like some diseases it can only be controlled, but not totally be cured. It can be hold in check within tolerable limits. Corruption has a corrosive impact on national economy. We have tolerated corruption for a very long time and it is the right time now to root it out in such circumstances when the world is passing through recession now-a-days.

← ‘Character’ – a translated poem in Gujarati (ચારિત્ર્ય)
Who is really insane? – ‘Seldom’ such Posts (3) →

3 responses to “Rising above Corruption – A General Review”